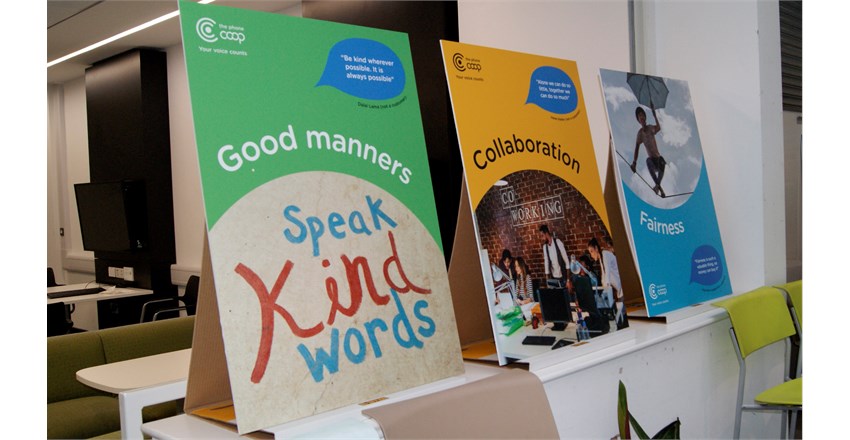 This letter was published on the 15th of February 2018 at Co-op News.

Jane Watts, The Phone Co-op Chair, responds to the Co-op News AGM report published on the 8th of February 2018.

We are keen to encourage debate and listen to members’ views and opinions, however we would like firstly to correct a few factual inaccuracies in Mr Bickle’s report and, secondly, to explain the thinking behind the five year growth plan outlined at the meeting.

Mr Bickle’s report stated that the projected losses were £1.09m in the first year, £1.91m in the second year and £2.5m in the third year.

Unfortunately Mr Bickle was referring to the wrong slide: these are in fact figures for projected additional spend and NOT for profit and loss. The correct figures are as follows:

Secondly, Mr Bickle reports that, “Former director (and former Co-op Group chair) Bob Burlton asked about the terms of the lease for the new head office and was assured that it was a three-year lease with a break-point after two years.”

Mr Murley however made it clear that the lease was for five years with a two year break point.

Finally, Mr Bickle’s account said, “The interim chief executive, Peter Murley, opened his report on the society’s strategy with what he claimed to be a controversial statement, that he believed The Phone Co-op to be “a telco business which happens to be a co-operative rather than a co-operative that happens to be in telco.”

The need for refocus

The Phone Co-op believes this is an important distinction to make. We are primarily a telecoms business whose uniqueness derives from its status as a co-op, not the other way round. To survive as a business, and therefore as a co-op, we need to be able to compete in an increasingly crowded and difficult market. We have to refocus our business to allow us to compete in less price-sensitive market sectors, which will provide us with the profits we need to survive and go forward both as a business and as a co-op.

We will never compromise our co-operative values. As a co-op, our business is owned by our members, and their investment in The Phone Co-op, both financial and practical, is key to our success.

However, the time has come for us to face the issues that, if ignored, will very likely lead to the failure of the business. Our five-year strategy therefore addresses the need for investment in systems, people, premises and infrastructure. It also reflects the fact that our customer demographic is changing and that we have to refocus our plans to be ‘where our customers are’.

We must rectify, quickly, our shortcomings in premises, people, systems, infrastructure and business partnerships. Our proposed new offices at Bloxham Mill in Banbury will provide our team with an efficient and appropriate working environment and enable us to implement the systems and infrastructure we need. We are improving our staffing levels and remuneration structure to ensure we can attract the best people to our business.

As our former chair, Shelagh Young said at the AGM, this is not only a strategy for growth, it is a strategy for survival. We have reached a position where business turnaround is the only option. We are competing in a consumer market which is increasingly price sensitive and in which, with under 30,000 customers, we can only ever be a niche player. At the same time, the business to business market, which offers potential for greater success, is undergoing major changes in service provision, products and solutions.

We have a real opportunity to position the Phone Co-op as the provider of choice for socially responsible businesses, co-operatives and small corporates and our plan is formulated to target these potential customers. To succeed, we need to take more risk, but the board and the management team firmly believes it is a risk that will pay off within five years.

Talking, listening and debating are the essence of a co-operative business and we are keen to tell members more about our plans and, equally important, hear their feedback, listen to their concerns and address them.

To ensure adequate debate about our future strategy, we have called a Special General Meeting for Saturday 28 April in Sheffield to which all members have been invited.

Staff and members alike are proud of The Phone Co-op and what it has achieved over the past two decades. We are now at a turnaround point and the decisions we make now will enable us to thrive and succeed in the future and continue to be a beacon for co-operative business success.