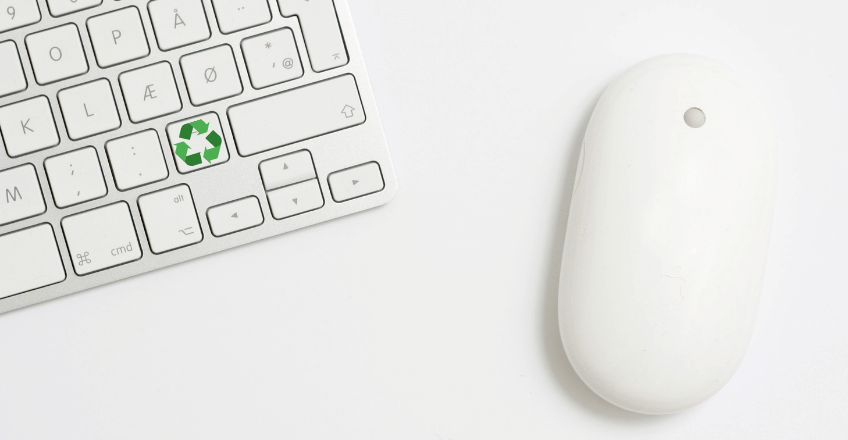 You might replace your electronic gadgets because they’re broken, but more than likely it’s because manufacturers launch newer, better models and upgrades to operating systems that just won’t run on your old mobile or iPad, or the Chrome book you bought last year doesn’t have enough memory to run the latest OS.

Whether it’s a battery that no longer holds power for more than an hour, a broken camera, or you just want the next best thing in electronic gadgetry - our electronic devices are regularly and easily replaced.

The problem is the increase in hi-tech consumption leads to an increase in e-waste which has a direct impact on the environment. In the UK we create a huge amount of electronic waste – the second highest in the world.

According to a House of Commons Environment Audit Committee report Electronic waste and the Circular Economy worldwide estimates put the number of devices connected to the internet between 25–50 billion in 2020, which is more than triple the number of people on the planet.

Apparently, each UK household has 20 unused electronic items hoarded at home, with enough unused cables to go around the world 5 times.

As part of their commitment to minimising waste, the government aims to improve the environmental performance of electrical and electronic equipment through promoting the waste hierarchy of:

Only if a mobile phone or laptop is totally unusable should it be discarded. Simply throwing your device in the bin once it’s passed its sell by date should not be an option as many electronic devices contain toxic substances such as arsenic, beryllium, cadmium, lead, and mercury. When electronics are improperly disposed and end up in landfills, these toxic chemicals are released, seeping into the soil, water, and our ecosystems and ultimately damaging our health.

According to the House of Common’s report, 2.8 million tonnes of CO2 emissions could be saved, that’s the equivalent of taking 1.3 million cars off the road, if all our small, old electricals that are being thrown away or hoarded were correctly recycled and re-purposed.

Research has found that if the lifespan of a smartphone was extended by a year, it would cut its CO2 impact by 31%. According to a European Environmental Bureau (EEB) study (2019), extending the lifetime of all washing machines, smartphones, laptops and vacuum cleaners in Europe by one year would lead to annual savings of around four million tonnes of carbon dioxide by 2030, which is equivalent to taking over two million cars off the roads for a year.

Your Co-op Mobile are already addressing these very real issues by partnering their mobile offering with Fairphone, the mobile phone manufacturer that’s created a more sustainable smartphone. Their goal is to make their mobile phones’ hardware last as long as possible, and to provide the support needed to keep software up to date, because the longer you can keep your phone, the smaller its environmental footprint.

They’re also moving one step closer to a circular economy by encouraging the reuse and repair of their phones by researching electronics recycling options and reducing electronic waste worldwide.

If you’re looking to upgrade your mobile this could be your chance to change more than your phone.

Why not keep your current handset but give it a powerful new lease of life with unlimited calls and texts and 30GB of data, that’s 10% off. When you switch as a member, you can save more by using MEMBERS10 at checkout. Not only this, but we’ll also plant a tree and make your service climate-positive, by reducing your monthly carbon footprint by 25kg with help from our climate action partners Ecologi.