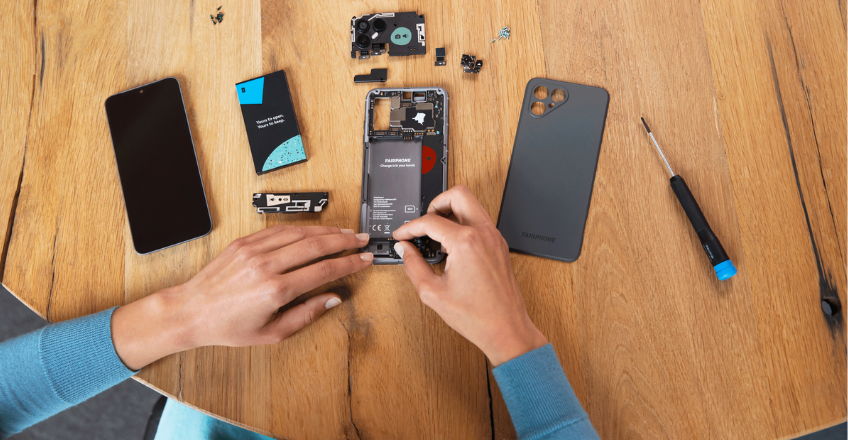 The journey from the earth the cobalt or gold is taken from to create the mobile phone that sits in your hand is a complex one, environmentally unfriendly and generally full of unethical practices. The only way to create a fairer electronics industry is to make change from the inside and to give a voice to the people who are often at the coal front of production. To understand what ‘fair’ really means involves understanding the practices that go on behind the smartphones that have become so intrinsic to our every day lives.

The materials that make up our mobiles often come from small mining communities across the world where people work for sub-standard wages, in unsafe working conditions and where child labour is often the norm. Whilst the demand for the next best thing outstrips supply the pressure on these communities to provide more for less will continue.

Fairphone is the first mobile phone manufacturer to put sustainability at the heart of their manufacturing process. As well as using recycled plastics and copper in their phones, they were the first electronics company to source gold from Fairtrade-certified artisanal mines means miners are guaranteed a living wage and rigorous social, economic and environmental regulations are followed including child protection policies.

One of the biggest steps towards creating the most sustainable phone in the world has been the Fairphone 4’s modular design. Given a 10/10 rating from iFixit for its repairability – the latest Fairphone design has been built for longevity because the most sustainable phone is the phone you use for longer. Fairphone is the only smartphone in the world to be awarded a perfect iFixit score.

On a guest blog for Fairphone, Taylor Dixon from iFixit said: “The most important message I can relay to smartphone designers—and users—is just how crucial modularity is to the longevity of any device. Modularity often dictates whether a device can be useful for an extra year or two, and how efficiently and effectively a device can be recycled at the end of its life.”

No part of Fairphone 4 is glued shut, so you can choose to easily repair it yourself. Just using your fingers and a Phillips screwdriver Fairphone owners can access the phone’s screen, cameras, ports and battery and you don’t need to be an expert to swap out the battery or display. Fairphone also promises long-term support, software updates and a 5-year warranty for every Fairphone 4 when purchased before the end of December 2022.

Join the fix it community

When you buy a Fairphone 4 you buy into a way of life, into a community that cares about the planet, human rights, and worker well-being.

iFixit is an American based community which is helping to reduce the environmental impact of electronic devices by spreading the mantra of ‘The Repair Revolution’. Their ethos is: repair saves you money, saves the environment and helps us connect to our own things. It creates freedom, jobs and is sustainable. Now with followers from all over the world iFixit teaches people how to fix almost anything, including Fairphone mobiles and empowers individuals to share their knowledge with the rest of the world.

That’s why we’ve partnered with companies like Fairphone and believe in spreading the iFixit word. We care about the climate, about our planet and in reducing waste. We believe in the power of community and in supporting communities to do great things.

Why not join the Fairphone community now?