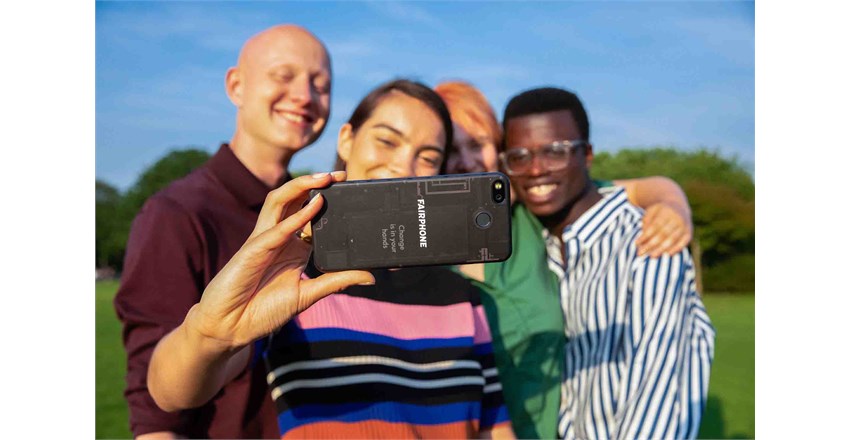 Nearly three years after the launch of the Fairphone 2, Fairphone launched its latest sustainable phone. “A great phone that is kinder to people and to the earth” describes the new Fairphone 3, focused on social values, ethical manufacturing, the longevity of the phone, and modular replacement parts.

If you are looking for some ethical technology, making sure that your next smartphone was not produced using child labour or conflicting minerals, then you have found the perfect product, the Fairphone 3.

The phone is available now with The Phone Co-op with a variety of mobile deals. The newest of Fairphone comes with a rear-mounted fingerprint scanner, and the same modular design as its predecessors, including a mini-screwdriver to easily take apart and repair yourself.

The modular design allows you to keep the phone for longer and it doesn’t come with any accessories, reducing the amount of electronic waste and lessening demand for new models, but who doesn’t already have a draw full of earphones or chargers at home?

Fairphone 3: What you get

The Fairphone 3 has a 5.7-inch screen with a 1080p resolutions, and a Snapdragon 632 processor inside with 4GB of RAM. There’s 64GB of storage space, a MicroSD card slot, a fingerprint sensor on the back of the phone, and a 12-megapixel camera, too. The selfie camera has 8 megapixels, and the battery has a 3.00mAh capacity. Android 9 Pie is installed and does not have a custom interface over the top.

iFixit gives Fairphone 3 a perfect 10 for repairability as most of the components inside the modules are individually replaceable.

But the real difference lies under the surface, the point is to impress on buyers that ethical internals are more than enough. Fairphone is the first smartphone company to integrate Fairtrade gold into its supply chain.

What do the reviews say until now?

A month after its launch, users consider the Fairphone 3 as a niche product and some experts see the opportunity to spread the word and extend the ethical tech movement.

There is tough competition from other brands whose propositions is measured in terms of “value for money”. But when you consider that your spend with Fairphone goes to making a more ethical and sustainable phone with better working conditions for the people involved in the process, is that not better than having more higher-end specs?

In terms of performance, Techcrunch stated that “Fairphone 3 isn’t anything to write home about. It checks all the usual boxes of messaging, photos, apps and Internet browsing. It gets the job done”. Besides, they confirmed that Fairphone has done a lot of work to improve some of the features which were missing in the Fairphone 2, such as the improved camera in the new model.

CEO Eva Gouwens says it’s designed for people who “don’t want the best phone in the world but want the best of the world in a phone”. If you are a consumer that worries about appearance, you wouldn’t go with the Fairphone 3. Endgadget said that – “Fairphone 2 wasn’t a great-looking device. However, Fairphone 3 is utterly gorgeous, and the sort of device I’d be happy to use”.

If you are one of the 15 million people in the UK who are disposing of a mobile phone this year, you can help to alleviate the environmental strain by recycling your handset. Fairphone runs a recycling programme that allows you to get rid of your old phone and get a discount on your purchase of the new Fairphone 3.

Why you should choose The Phone Co-op when buying Fairphone 3?

At The Phone Co-op we are proud to be partners with Fairphone and we can offer this world leading handset with a variety of mobile deals – all with inclusive unlimited texts and minutes and a choice of data.

The Phone Co-op is the UK’s only co-operative telecoms supplier, owned by our members and run for the benefit of our customers.  Our proposition is focused on helping others and making a positive impact on the world, we know it is worth it.